For John and Merce

Merce Cunningham, choreographer, and John Cage, composer, were two of the most influential artist/collaborators of the 20th century. Less well known, because they kept it that way, the two were also life partners. This is the central tension that Malcolm Shute explores in a dance in their honor: for two men so often in the public eye, they kept their private lives scrupulously private. “For John and Merce” premiered in the Contact Dance International Film Festival, June 28-July 2 in Toronto. 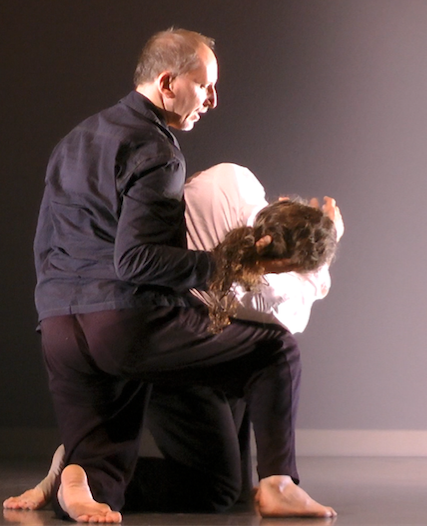 In a love letter, Cage wrote, “i would like to measure my breath in relation to the air between us.” Despite other testimony of a fiery passion published posthumously, Cunningham and Cage were never fiery in public. They were never photographed kissing; they did not write publicly of their romance; many of their biographers omit it entirely. Shute and dancing partner Alexander Short, of Human Landscape Dance, similarly walk this line between public and private, athletic and intimate. Short tosses Shute across his body, then flips Shute into the air to represent the bold, adventurous artistry of Cunningham and Cage; but then the two pause, Shute holding Short’s heavy head, to represent a tender moment almost behind the scenes: hands support, but lips do not touch. The dance is a tribute to the persistent, understated affection that bound Cunningham and Cage, but also a reminder of the cultural hostility that once forced many men and women to hide a part of their lives that should have been celebrated.

“For John and Merce” appeared Thursday June 29 at 8pm in the Zen and the Art of Dance Mechanics dance performance and screening in the Betty Oliphant Theatre, 404 Jarvis St, Toronto. It was subsequently performed in the Inertia showcase at Towson University.