Attune brings together artists from Japan and The United States: featuring Heidi Durning, Kumiko Nonaka, Malcolm Shute, and Tabata Vara. Beginning with 1-hour workshops in creative movement for children ages 3-5 at 10am, and contact improvisation for adults at 12pm, the event culminates in a live dance performance from 2-3:30pm. Those who attend the improvisation workshop are invited to perform at 2pm. Attune takes place on Sunday June 11, 2023, at the Shinpukuji Temple in Kameoka City 真福寺 亀岡市, Shimokubo-1 Sogabecho Nishijo, Kameoka, Kyoto 621-0028. Information on Shinpukuji Temple.

Attune was last held prior to the pandemic. We are all very grateful to be able to assemble again. The dances in this year’s performance will be linked by themes of water. Heidi S. Durning’s solo recreates water, circulating flows like a mermaid. Heidi, Malcolm, and Tabata will also collaborate on an improvised dance together. Kumiko Nonaka, master of the Noh flute, will accompany dances. Malcolm Shute brings a contemporary dance quartet depicting seaweed floating, rolling, and launched by waves. In addition, he brings a duet inspired by a tea ceremony in which dancers pour their weight into each other. Tabata Vara will present “Immolatio,” a trio that portrays an offering of mind, body, and soul to an otherworldly presence, a desperate plea to the void.

Attune classes and performance are 500 yen, but space is limited. Please rsvp at this link https://attunedance.eventbrite.com 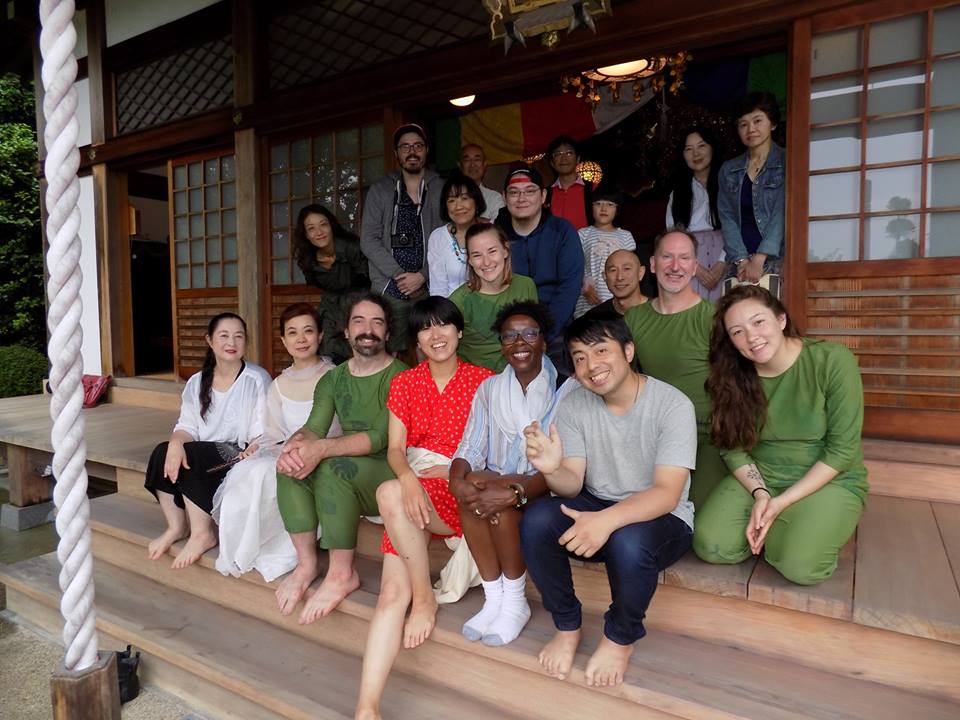 Heidi S. Durning dances between cultures. Her choreography fuses Japanese Classical Dance and Contemporary Dance. She is also an accomplished Classical Japanese dancer under the name Fujima Kanso o. Her unique fusion of impulses, along with her passion for working with artists from diverse backgrounds and countries, has resulted in a performance style that is technically accomplished and rich in texture, spirit, and vibrancy. Based in Kyoto, Heidi continues to teach, create, and perform globally.

NONAKA, Kumiko (Noh-flute player), graduated from International Christian University, Tokyo with BA (Liberal Arts) in 1986. Studying piano and violin for enjoyment sparked her interest in Japanese traditional music. She began studying noh-flute (a bamboo flute in Noh theatre) with Hiroyuki Matsuda. Performing publicly since 1994, Nonaka has played traditional Noh solo pieces, and collaborated with players of western, eastern, and folklore musical instruments, and traditional and contemporary dancers. She has been invited to many memorial events at shrines and temples, and also performed abroad.

Tabata Vara founder of Totema Dance Company, a daughter of Mexican immigrants, is a prominent choreographer in the Washington DC dance community. She has shown work at Nachmo DC and Dance Icons, and collaborated on dance videos with videographers in the DC area. In 2022 she founded Totema Dance Company. As Artistic Director, she evokes untouched emotions from audiences by carefully coaching dancers to embrace their authenticity.

Shinpukuji Temple is a temple of the Soto sect (Zen sect). Shinpukuji Temple stands on a raised stratum of rocks (chert layer) formed from the dead cells of plankton that lived in the lake a long time ago.

Human Landscape Dance was founded in 2006, and has since brought contact choreography around the world. Specializing in artist partnerships, Human Landscape Dance has given performances, held workshops, and shot video footage in Europe, Asia, and South America, as well as cities across the US and Canada. Noted for “…ingenious choreography and staging...” by the Washington Post, the dances of Artistic Director Malcolm Shute are characterized by intimate portraits of people as they undergo change. Using touch to communicate, bodies mold with their environment to create a collage of images.