"Swans" (2015) is our modern retelling of Swan Lake. To deconstruct this tragic ballet about a prince who cannot decide between a white swan and a black swan, we created four swans for him to vacillate over: white, black, red, and gray. Each swan has a different attitude toward Siegfried, played by the incomparable Alexander Short, including hostile, seductive, dependent, and indifferent. In duets, they alternately confront him, fly upon his shoulder, lean gently into his arms, or push him away. He is both Siegfried and Rothbart, both object of their devotion, and cruel oppressor. 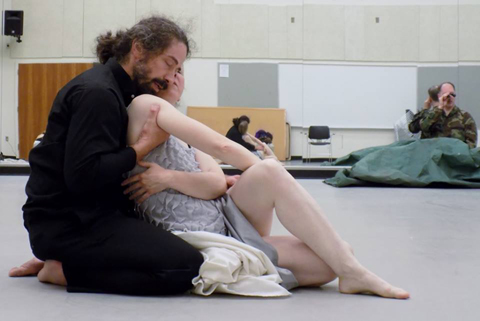 In between duets, Siegfried spies on the swans through binoculars, like a naturalist behind a blind: remote, but obsessed. Each swan raises the next, like a parent her child. The swans assemble each other part by part: first, White Swan wakes Black Swan, whose head dangles like that of an infant duck; second, Black Swan unearths Gray Swan, played by Susan Donham, whose wings slowly unfurl, as if unfamiliar appendages; third, Gray Swan tugs Red Swan from her egg, talons dragging across arms; finally, White and Black Swan have a slow duet for the neck alone. Unlike the ballet, in which Rothbart transforms women into swans for his own amusement, in our dance, the swans create each other.

"Swans" has three endings, to exaggerate the customary two endings of Swan Lake. In the happy ending, Siegfried carries Gray Swan off to the castle; in the tragic ending, White Swan, played by Eliza Talbott, flies backward through the sky, drawn inevitably to suicide; Red Swan, played by Amanda Abrams, dances alone, revisiting the movements she had made with Siegfried. Finally, she walks away, leaving behind the mad ambition to be princess. 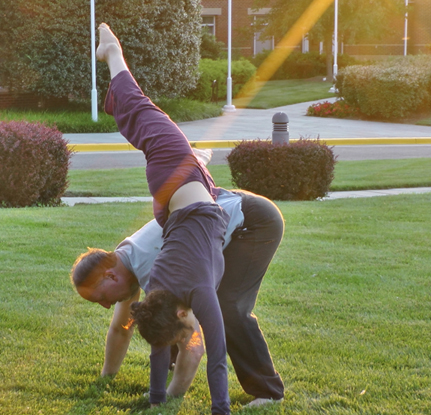 "Swans" questions the gender norms that underlie the ballet. By pitting the prince against four swans, we call attention to the ridiculous notion that all women are alike, a theme that recurs continually in Swan Lake, which depicts various women flirting with the perpetually bored Siegfried. In addition, Black Swan, the only swan who kisses Siegfried outright, is played by a man, Malcolm Shute, calling attention to the heterosexist assumptions underlying the myth.