In The Great Wave off Kanagawa, by Hokusai, three fishing boats float in the trough of a gigantic rogue wave that stretches claw-like whitecaps over them. Fishermen cling to oars, desperate to stay aboard when the water crashes upon them. Mount Fuji is visible in the distance, snow covered, like an additional wave, completing the tableau of dominating natural barriers.

“Great Wave” tries to capture the weighted suspension in the moment portrayed by the woodblock print. From a relatively calm sea, the rogue wave will emerge like a tower, catching people unaware, able only to hang on, to ride the wave wherever it takes them. It is a metaphor for the influence of change in our lives. We behave as if we can control our lives, safeguard our fragile bodies, but are confronted from time to time by the uncomfortable truth that we are awash in the swell. 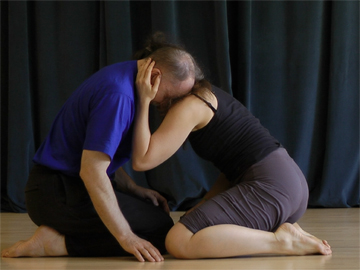 We depend on each other as well. I sought to emphasize this aspect of the image: the fishermen embracing their oars, grasping the boat and each other for safety, for warmth. When caring for each other, we become the air, the light, the thin strip of wood that alone staves off disaster.